Auntie A. called me Faffa because when I was little I couldn’t say my middle name, Arthur. Gary, say your name. “Gary Faffa Young”

Our family has three March babies: me, Debbie (RIP 2015), and Aunt Alice — 2nd, 4th, and 10th. We would celebrate together, and after, “How old are you now? How old are you now?” everyone would try to add our ages. She never really wanted anything for her birthday and would say, “Don’t get me anything.”

She was fun, and had a quick wit and sharp tongue, and made a concerted effort to pass those life skills and a sense of independence to her daughter, nieces, and nephews. I always thought of her as the griot of the family because she would teach us children’s songs and tell stories.

I remember sitting on the porch with her at my grandmother’s, with the family gathered, reluctantly hand churning ice cream, taking turns with my sister and cousins. It’s literally a bucket with a container inside surrounded by ice, with a handle that you had to turn for, like, an hour. It was so Amish. No work, no ice cream, she told me.

Even though it’s been decades since she had it, I loved that green Volkswagen Beetle she had. Remember those? Good times. Partial to VW Beetles.

Aging isn’t for cowards, she’d say. A hundred and one year old body is going to decline and there’s a precipice at the end of that process. It’s the most natural of things, but it’s still brutal. Her passing wasn’t a surprise but it’s still a shock. It’s hard to believe she’s gone. She’s just always been there.

When the storm of the century is forecast to hit, knowing when and where it will land does absolutely nothing to lessen the damage. You just have the opportunity to take cover, steel yourself, and resign yourself to the fact that life will be different after it passes. 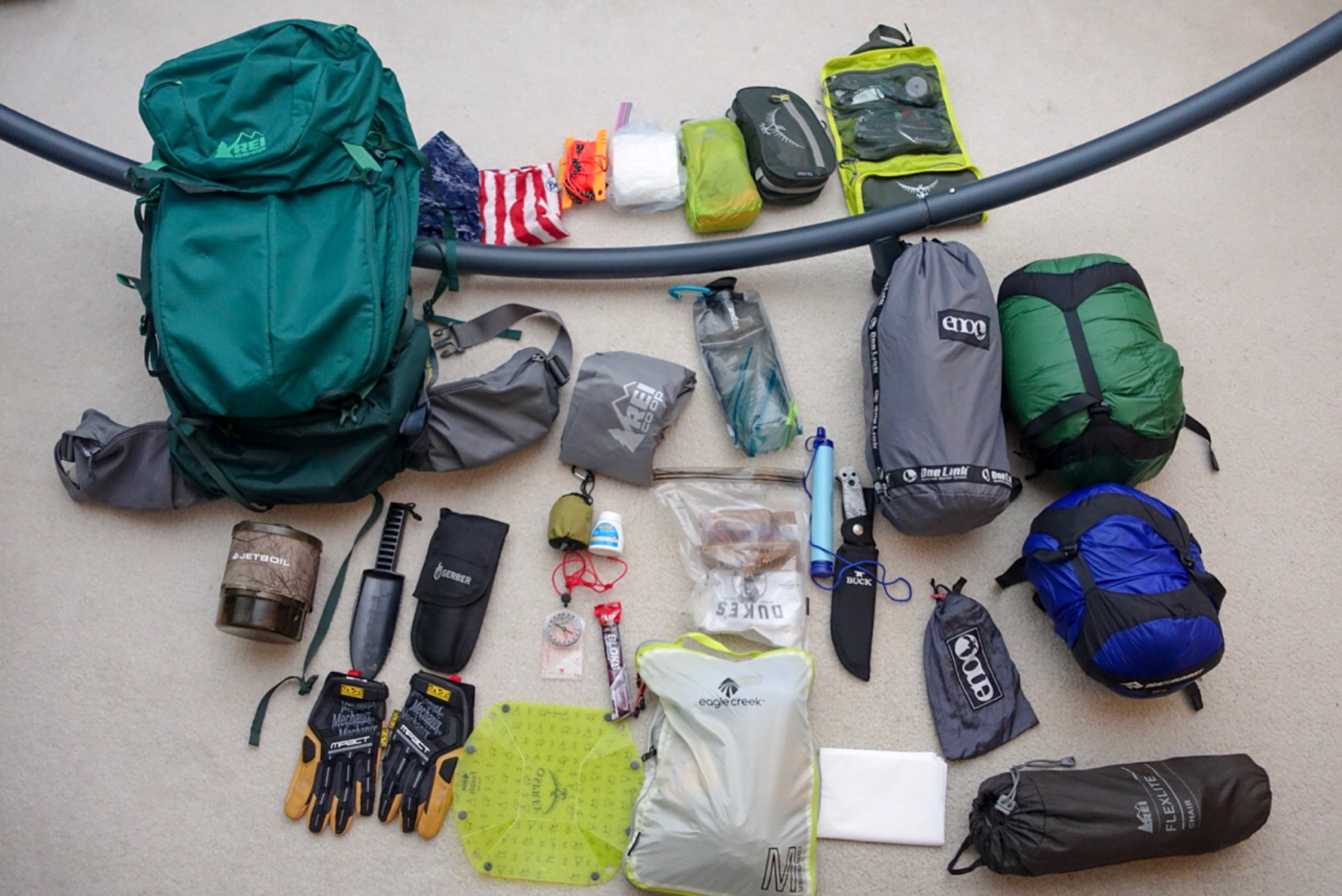 35 lbs. including water so about 29 lbs. without. Like hiking carrying a 16kg kettlebell. Notice that I’m missing food and a first aid kit. And no SPOT gps. Also, no camera in the pic. I need to condition myself more if I’m going to do this more than once a year. You definitely feel the weight. It’s work. I wouldn’t mind shaving 10 lbs. off of here, but I like to go plush. Base weight is all of the stuff except for consumables and what you’re wearing.

If you want to go light, you’re not supposed to pack in terms of “what if”. Someone said it’s called “packing your fears”.

What if there aren’t any good trees for hanging a hammock? I’d better bring the longer (heavier) straps. What if other people don’t bring xyz? I’d better take super extra water.

There are lessons to be learned: knowing one’s limits, comfort, goals, skills, and companions (or lack thereof).

TLDR: Count your blessings. We could have cloacas instead. Also, BRAT.

I’ve been having some stomach issues recently. I have no idea why or why not, what, who, how, etc. But as things start to improve — knock on food — I find myself appreciating our bodily processes more and more.

Where was I? Oh, right. Farts. They may not be ideal in most social situations, but the amount of information and sensory feedback is astounding. It doesn’t make it any less rude to talk about or any less hilarious in multiple ways, but the fact remains.

Here’s a question for you.

Why would anyone drive for hours possibly in dangerous snowy and icy conditions, fly across countries and oceans, pay hundreds of dollars or even thousands, stand outside often in freezing temperatures, brave crowds, wait sometimes for half an hour in a lift line on a busy day, all while not knowing exactly if the conditions will be decent, risk life changing injury or even death, frustration and humiliation and embarrassment for beginners, just for two to four minutes (at these smaller East Coast resorts) of actual skiing/snowboarding time per run?

Bryce is one of the closest and more reasonably priced resorts nearby, so after obsessing, checking the weather constantly, and basically being incredibly bored and purposeless, I went for it. I signed up for a two hour lesson.

Here’s what I did not know

I don’t know about you but sometimes when I’m sitting around being a potato I forget that I’m not always a potato.

2018 was long. I was unemployed for half of it. There are pros and cons to that, besides the obvious.  Suffice it to say, I’m capable of entertaining myself. It takes a while to reach the tipping point between “maybe i could” and “I’m gonna”.

I did not do a lot of the things I intended. Only a few hikes, mountain biking once or twice, no backpacking, hardly went camping. What the heck did I do with my life? I did spend a lot of time catching up with the web development industry, as much as one can. I still have to do my last React project before Jan. 13th. But the year is kind of a jumble. Like, I didn’t accomplish much.

Luckily for me, I’m a habitual picture taker.

I went on a multi-city road trip to Miami to find warmer weather.

Inside: trigger warning for talk of sexual assault and violence; Kavanaugh hearing; It’s too long. I’m trying to pare it down a bit.; Wait. How is it 300 words longer now?

I’ve been working intermittently on a blog entry titled “In Defense of Men” for a while.

It is a little #notallmen, to be honest, but #notallnotallmen. (I’m going to generalize, but it’s for the sake of efficient writing. Hopefully, that’s obvious so we can have a good-faith discussion or argument.)

Every time I’m on the verge of making a cogent, even-handed comment about manhood, I read the news and am shocked/not-shocked at how men are garbage. I mean, damn, y’all. Come on.

How do we have a discussion about a group and acknowledge the humanity of individuals? That’s what I’m trying to do here and I fail miserably with every revision.

I think many men are struggling for a sense of purpose and meaningful connection in a world of shallow, quasi-social interactions and relationships. Too often we’re lonely, isolated, lacking community, and, frankly, we lack coping skills. The online world exacerbates our problems by serving as a crucible for radicalizing alienation.

It’s soul crushing to not have the fundamental building blocks of human experience and actualization, and then be told that that makes you weak — less of a man. Less valid as a person.

None of this is the sole domain of men, of course, but statistics on suicide bear this out, in my “and who are you and why should we care what you think” opinion.

And yet, men have a firm hold on power and positions of leadership. Running the world (into the ground) and living like ancient Roman emperors. I mean, I don’t. 99% of us don’t, give or take. Not a lot of men, proportionally speaking, but it’s a man’s world. For now, at least.

The problem is that, regardless of social position, masculine pain is directed squarely at women in the worst ways possible, from mundane to evil.

When we’re entitled, we’re a threat. When we’re in pain, we’re deadly.

Despite the fact that I called myself and other men garbage above, I really don’t want to demonize men, masculinity, and male sexuality. I am manfolk, after all.

Still, we do have to address the fact that the dark side of masculinity and male sexuality is akin to an iceberg’s undercarriage — the proverbial 90% beneath the surface that you don’t see that is in tenuous equilibrium with the 10% that you do see. 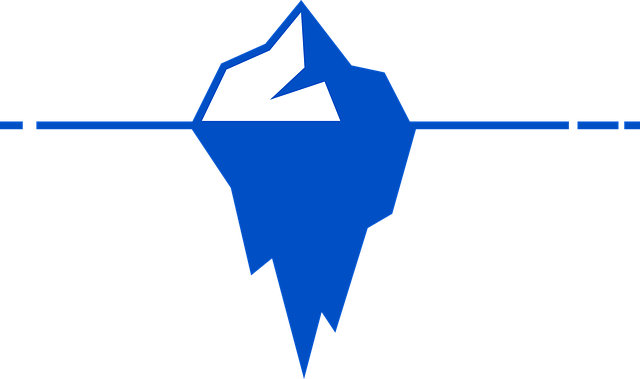