One of those is true.

Ladies and gentlemen. Bishes of all ages. You know and I know that I don’t need anymore expensive hobbies.

A few months ago someone asked if I was interested in scuba diving. I was like, “Bish, you crazy. I ain’t gettin’ in no deep azz water.”

Obviously, that was before my ascension to King of Swimming*. I haven’t been in a pool since the swimming III class ended. Still on the wait list for one, I think. There’s nothing stopping me from driving or even walking across the street, practically, and getting in the pool. Self-motivation isn’t my forte, particularly when I’m operating solo, which is the norm.

The water is on my mind a lot, though. No joke — I have woken from a night’s sleep frog or side kicking more than once.

I’m not saying that I planned things out this way. I signed up on a whim a few weeks ago. Because it was there. A gentle intro to scuba diving? They do that? I’m in, if not a little anxious. But the PADI Scuba Discovery Class by Blue Planet Scuba gets me closer to my goal of swimming in the Caribbean and closer to swimming with, like, seals or dolphins or sea turtles or those cute beach pigs or brain eating amoeba or krakens. 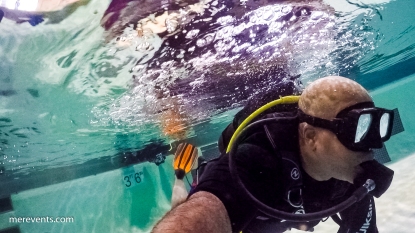 I did read somewhere that swimming fitness improves quickly if you work at it three to four times a week. You huff and puff and struggle and then boom. That’s a lot of pool time, though. A lot of locker room nudity. That’s a lifestyle.

I would say that I have a healthy fear of water. There’s definitely a mental burr of trepidation. Like having a small pebble in your shoe. It’s never as big as it feels but it’s there. In all honesty, I can’t say that I’m not afraid of these things.

Fear is the mindkiller.

But you know. It’s calculated risk. We walk across the street all the time. We cross a stampede of metallic, giant buffaloes with inattentive, impatient and emotionally unstable pilots all the time, but in general we pick the optimal conditions (location, timing, regulations, control points) that are most likely to result in success and least likely to result in injury or death. Same deal.

The dive pool was 3’6″ at one end and about 5’0″(?) at the other end. That was awkward during the snorkel or skin diving part of the scuba class. I kept getting water in the snorkel and when my timing sucked I ran out of air to clear the snorkel. I would grab the lane line, forgetting that I could float or side breathe or whatever. I think I want a dry snorkel when the time comes. Trying to breathe through water is not the best feeling.

Sentence of the day: Resume breathing with caution.

The highlight of the class for me was the dive well. After going over the fundamentals and a few adjustments we swam across the pool. It was surreal and magical, gliding along in the blueness. Holy crap, I’m breathing underwater. I’m underwater. Breathing.

As we crossed the pool, we came to this thing that I thought was a big underwater window. Like the windows at the zoo that let you watch polar bears swim. That was just a trick of the light, though. It was the dive well, a much deeper adjoining room of the pool. All of a sudden there was an edge as the floor suddenly dropped away another fifteen feet. Whoa. Whaaaaat. It was intimidating and inviting. Intimiviting. John, our instructor, had toys to play with and toss to each other. I can’t throw worth a damn underwater, apparently. The motivating factor for me to reach the bottom was the toy shark, semi-articulated and about the size of a loaf of bread. When you threw it, it glided like, you know, a shark.

The trickiest part was maneuvering, including getting snagged on the lane lines. The tank, vest and weights weigh on the order of 30 lbs. so you have to account for momentum. Whatever direction the tank is moving in, it wants to keep moving. Stopping, turning, leveling out. All a bit tricky due to inertia. You’re a projectile. A projectile whose foot can cramp after being in fins for a while.

I was never exactly where I wanted to be, or at the depth I wanted to be … clear your ears … or oriented exactly how I meant to be, but I got around. I got that shark, anyway. (Unfortunately, John didn’t want me putzing around with my camera or GoPro in the deep end so I don’t have any shots of it.)

I have this list — an actual written list — of things to do. It’s categorized and everything: hiking, cycling, camping, paddling, swimming, experiences, entertainment, music, dining, classes, locations, parks. Fantastic Experiences and Where to Find Them. None of it is out of reach or exorbitant. It’s a very down to earth affair. It’s kind of my “cool/fun things that I don’t want to do alone” list. And some of it is “places I want to go with someone special”. Some of the stuff would require circumstances that will never happen. That’s life. Ironically, the more I do, the longer the list gets.

Go camping and there’s so many places to choose from that will reset your calm, each with its own personality and flavor. Get a taste of backpacking and it opens up a world of outdoors to explore and soak your roots in. Paddling. Kayak camping lets you get to nearly pristine places that you can’t get to by land. Scuba diving. My god. Some of the most beautiful places on this planet unfurl when water is a recreational option. Since Sunday, people have been telling me about locations in the DMV that I didn’t know existed, not to mention all of the tropical locales.

The list has a whole new category now and has grown a lot over the past few days.

So of course, now I want to get my own mask, snorkel, and fins. And of course, the equipment is different for scuba diving vs. snorkeling. Or maybe it’s just the fins that are different? Luckily, there are plenty of reputable venues to take advantage of when I’m able.

The Scuba Discovery Class is an introduction to what it’s like to be in the water. The Open Water Certification class (and the in between class) involve a lot more of, “Here’s what you do when something goes wrong”. What if you run out of air? What if water gets in your mask? What if the regulator comes out of your mouth mid-dive? What if your BCD detaches somehow? I mean, imagine all the little things that could malfunction — or big things — while you’re 100 ft. below the surface of the water. (Personally, I’d be content to stay where it’s warmer and full of light.) What do you do, hot shot?